Today’s Bigg Boss episode was very interesting and filled with fun and activity. The King Khan, “Shahrukh Khan” and “Kajol” were still seen inside the house. Both of them had great fun with the housemates and gave them different fun games. They then called Suyyash, Prince and Kishwer to perform an act in front of them. Shahrukh said that they had to do a romantic scene but the twist was that one of them had to play the character of a dog.

Kishwer and Prince were made girlfriend and boyfriend while Suyyash played the role of a dog. Then they also called Priya and Rishabh for the acting performance but they went into another argument. 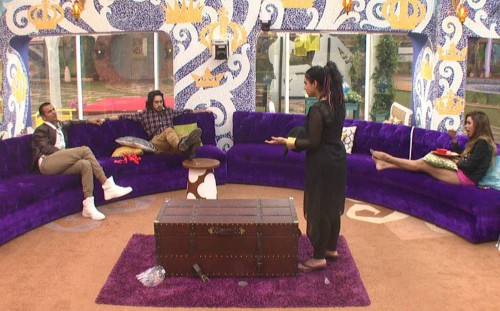 After both of the guests were gone, all the housemates were really upset about Rishabh and Priya’s behavior in front of Shahrukh and Kajol. Both of them were heavily condemned by almost all the housemates. Rishabh said that he still did not feel sorry for Priya at all and in no way, he could be her friend ever again. 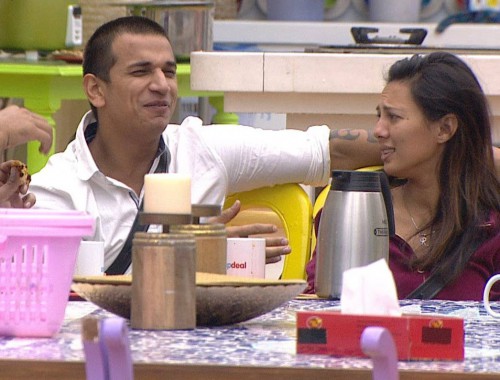 Bigg Boss then announced the new luxury budget task for the week. The interesting point was that this task had to affect the next captaincy and the amount deducted from the total prize money could also be returned through this particular task.

The housemates were divided into four pairs, Mandana Karimi and Kishwar Merchant, Priya Malik and Suyyash Rai, Keith Sequeira and Nora Fatehi, and Rishabh Sinha and Rochelle Maria Rao. Gizele Thakral was made the judge for the task while Prince Narula was not allowed to participate and was called inside the confession room. His task was to make a guess about which pair will win the task and if his prediction was right, an amount of 3 lacs would be returned to the housemates. 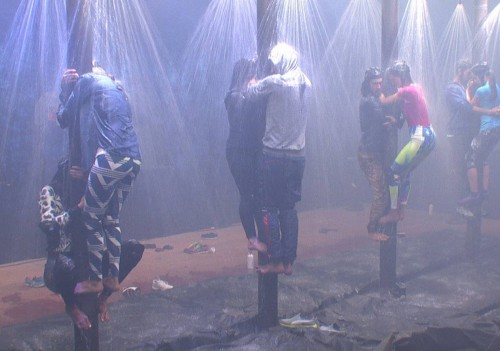 The task was that there were poles placed and 2 meters high, the pairs had to stand there with very little support underneath. Water was to be thrown from above their heads and they had to resist for as long as they could.

The task started and Mandana gave up quite early. Since this task was in pairs, Kishwer also had to leave the task.

The task is yet not over and will continue in tomorrow’s episode. Now tomorrow will tell which pair will actually win the task and what amount will be returned to the housemates.