Today was the last episode of the Bigg Boss Season 9, before the grand finale. In the morning, the housemates woke up with the voice of the renowned RJ Malishka who greeted all of them and wished them the best of luck for the finale. She then asked some questions to all the four housemates to which they answered. She also flirted with Bigg Boss and asked him if he had Mrs. Bigg Boss or not. Later on, Malishka once again talked to the housemates and this time, her listeners wanted to ask some questions from various housemates.

In today’s episode, though it was virtually the end of the show, Mandana Karimi drama and selfish attitude continued. She once again blamed the housemates [Rishabh Sinha, Rochelle Rao, Prince Narula] for not playing individually and wept a lot to seek sympathy of the voters outside the house.

Bigg Boss then invited the four contestants to the activity area and showed them their journey in the house. Bigg Boss also gave them funny names based on the names of the actual movies.

The famous singer “Mika Singh” also visited the house today and spent some good, fun time with all the housemates and told them that all of them were doing a great job. 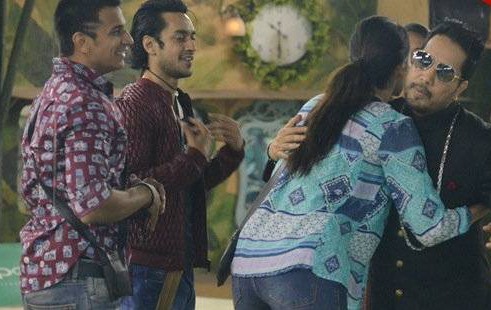 It was mentioned time and again during the bigg boss 9 show that only the last few moments were left and after that, the voting lines will be closed.

Tomorrow [TODAY 23RD JANUARY 2015] will be the grand finale of the Bigg Boss Double Trouble Season 9. It was shown that some very famous television stars will perform on the stage. In addition, the contestants of the current season will also show some sizzling dance performances.

Now only tomorrow’s episode will reveal who will eventually be crowned as the Bigg Boss Season 9 winner and will be able to win a whopping amount of Rs. 35 lacs.