According to this task, there was a stand for each of the contestants in the garden area which had some tubes filled with colored water.

As soon as the buzzer would ring, the contestants will try to ring the bell in the garden area. Whosoever will ring the bell, will get a chance to empty one of the tubes and he/she will need to tell a personal reason behind it. At the end of the task, two of the contestants whose tubes will have maximum water will be declared as the winner of the task.

The task started and firstly, Prince got a chance to ring the bell and he emptied Mandana’s tube. On the next buzzer, exactly the same happened and Prince yet again emptied Mandana’s tube. After that, a huge fight took place between Mandana Karimi and Prince Narula. Mandana blamed Prince for using different housemates for his own benefit while Prince accused her of being selfish. During the third time in the task, Rishabh Sinha rang the bell and emptied Prince’s tube. 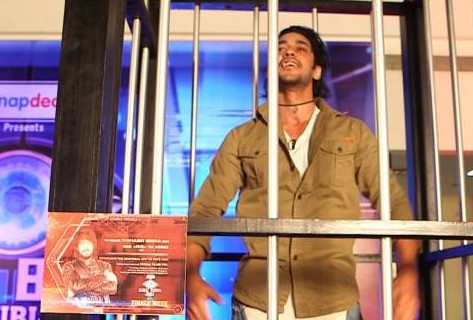 At the end of the task, Bigg Boss announced that since Rishabh and Rochelle Rao tubes had maximum water, they were given a chance to meet their fans outside the house. Both of them dressed up and went to a shopping mall where they appealed to their respective fans for voting for them as much as they could.

In tomorrow’s highlights, it was shown that the famous singer “Mika Singh” will come into the bigg boss 9 house to share some light moments with the housemates. [Type in Marathi]