Today’s Bigg Boss episode was a very unique and it was the history in the making. Yes, exactly, today’s show was really unique in its own way as first time ever in the history of this show, the King Khan “Shahrukh Khan” made his appearance along with Salman Khan. The show kicked off with a ravishing dance performance by the two superstars. 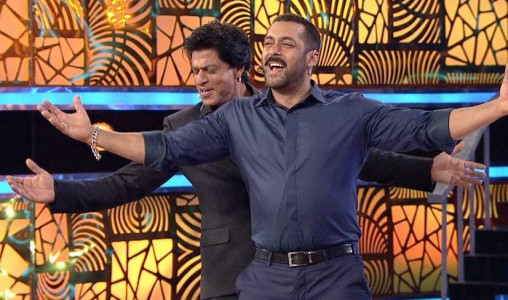 Bigg Boss announced on the stage all of India wants that Shahrukh and Salman should become fast friends. The crowd in front of them was going mad after these two. Both of them played some fun filled, very interesting games on the stage which indicated that despite all the drama between the two, they still share very good chemistry.

Snapdeal callers had also recorded a few interesting questions for the two of them. One of the callers asked them that how did they feel now after not talking to each other for such a long time. Shahrukh said that although apparently we were separated, yet we were not away from each other at heart. Salman also gave a similar reply and the fact was that their feelings seemed to be really genuine. 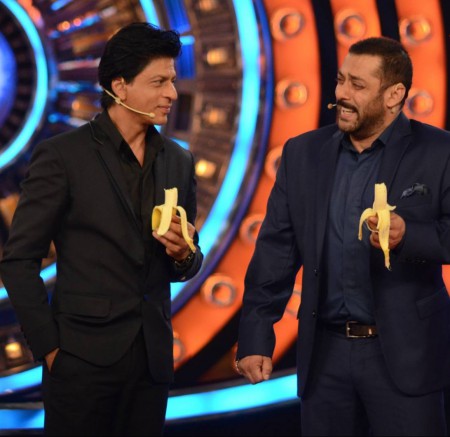 Later on, Kajol joined them and the trio looked awesome on stage. Shahrukh and Kajol were there actually in order to promote their upcoming film called “Dilwale“. Kajol and Shahrukh also danced on the stage and it seemed as if the 90s Bollywood was back. Shahrukh Khan was then seen inside the house and when he entered, Bigg Boss froze all the housemates. Shahrukh went on to kiss all the females and then all of them had great fun.

Salman then appeared on stage and told that Suyyash was eliminated. Kishwer was very upset obviously and cried a lot. However, Shahrukh asked Salman not to evict anyone as he was there today. Salman then told that there was a twist in the tail. Nobody was eliminated this week and in fact next week, the same six contestants will still remain nominated [Gizele Thakral, Mandana Karimi, Suyyash Rai, Rishabh Sinha, Rochelle Rao and Priya Malik].

Voting lines will be opened as usual and the votes of two weeks will be added to carry out the double eviction next week.