So today it was the start of the grand finale week, definitely the most important week of the whole season by far. In today’s episode, Bigg Boss called all the contestants inside the confession room turn by turn. First of called, Prince Narula was called in and Bigg Boss asked about his feelings on being in the finale week. Bigg Boss also mentioned that all the housemates were nominated for this last week, so all of them needed to be cautious.

Similarly, others were also called in and to Rochelle, Bigg Boss mentioned that she would be given a secret task.

Later on during the day, Bigg Boss again called Rochelle Rao in the confession room and asked her to wear an earpiece and also directed her to hide it using her attire. Bigg Boss mentioned that she will be instructed via the earpiece and will be asked to accomplish the task given.

Afterwards, Sunny Leone got connected to Rochelle via the earpiece and initially asked her to kiss all the boys inside the house, which she easily did. Next, Sunny asked her to flirt firstly with Rishabh Sinha and then with Prince. Rochelle also accomplished this part of the task and was appreciated by Sunny. 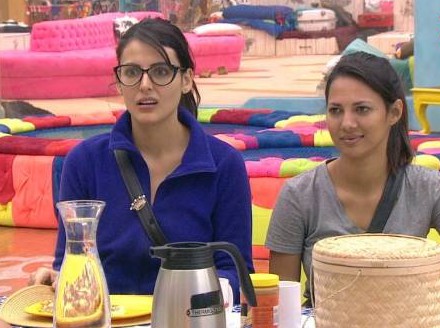 Next, she was instructed to make Mandana Karimi angry. While Rochelle was trying to do this, Keith Sequeira came in and at once, Sunny asked Rochelle to do pillow fight with Keith. Rochelle was even able to do that quite easily and Sunny was yet again impressed by her performance.

After that, Sunny asked Rochelle to bark while others are talking to each other. She once again did her job and Sunny finally told her that she had successfully completed all of her challenges and also forbade her to tell about this secret task to anyone.

Later on, Sunny Leone came inside the house mainly for the promotion of her upcoming film called “Mastizaade” which would be released on January 29, 2016. She then mentioned to the housemates that the weird things done by Rochelle today were a part of her secret task.

In tomorrow’s highlights, it was shown that three eliminated contestants of the current season namely Yuvika Chaudhary, Nora Fatehi and Gizele Thakral will visit the bigg boss 9 house.