Today’s Bigg Boss episode featured Salman Khan and his brilliant dance performance. Salman mentioned to the audience that Priya Malik had been evicted yesterday and today, it will not be a good day for Mandana Karimi. Meanwhile it was shown that Bigg Boss called Mandana inside the confession room and showed her some news in the newspaper. Bigg Boss [read about bigg boss 9 winner name] said that it is not allowed to give the outside news to the housemates but this one has to be told to Mandana. After reading the news, Mandana became extremely upset and started crying.

She came out of the confession room and discussed her sorrow with the fellow contestants. The Bigg Boss house was then graced by the arrival of two superstars of Bollywood industry namely Tushar Kapoor and Aftab Shivdasani. Both of them greeted the housemates and mentioned to them that they were there for the promotion of their upcoming film called “Kya Kool Hain Hum 3“. The film also featured Mandana Karimi along with these two superstars. Aftab and Tushar then played a huge prank with Mandana which literally scared the hell out of her.

A message from Ekta Kapoor, who was the producer of the film was run on the video monitor whereby she said that the movie would be released on January 22, 2016. However, being in the lead role, Mandana should be out of the house for the promotion of the film. Ekta Kapoor mentioned that if Mandana does not opt to move out of the house right now, she would sue her for a huge amount of 5 crores. Mandana became extremely upset and started crying. Aftab and Tushar tried to calm her down and then went out to the stage with Salman Khan.

Salman then asked Mandana about her decision and mentioned to her that if she leaves the Bigg Boss house right now, she will have to pay an amount of 1 crore to the show. However, as Mandana was about to literally faint, they played another message from Ekta Kapoor which stated that Mandana could stay inside the house but she must promote the film from inside the house. 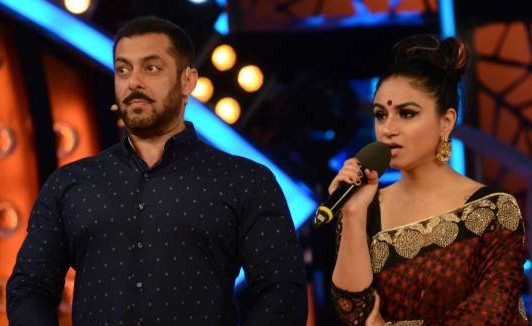 Salman Khan then called Priya on the stage and talked to her for a while. She said that she wanted Rishabh to win the show.

Tomorrow, the sizzling and hot diva, Sunny Leone will enter into the Bigg Boss 9 house, who has also been an ex contestant in one of the earlier seasons of the show.