Today’s episode from Bigg Boss Season 9, Double Trouble was another very interesting one. Bigg Boss announced that since Aman and Kishwer’s pair was the winner of the luxury budget task “Lagaan”, their performance was the best. 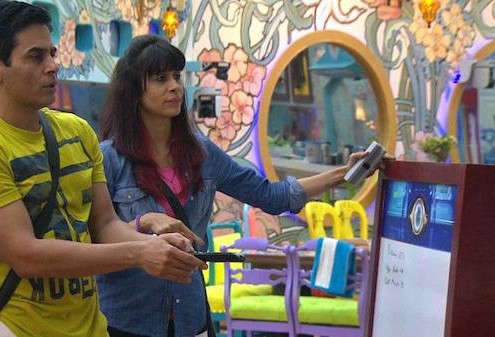 Afterwards, when Bigg Boss asked from the housemates regarding their decision, they said that they could not choose any single worst performing pair. Hearing this, Bigg Boss was very angry and called the captains inside the confession room where both of them were scolded and told that they have to come up with one name in the next 5 minutes.

After consulting with the housemates again, the captains called Keith and Mandana’s pair the worst performing in the “Lagaan” task. Due to this, Keith and Mandana were straight away nominated for the next nomination.

Later in the day, Bigg Boss announced that since Aman and Kishwer had earlier emerged as the winners of the task, they both were the candidates for the next captain of the house. This was to be decided by a tug of war competition which was won by the housemates on Kishwer’s side. Thus, Kishwer was made the captain of the house.

Total luxury budget points earned by the housemates after the task were 2500 but Bigg Boss deducted 1600 points. The reason for this deduction was the frequent conversation among various housemates in English. The housemates then shopped for the remaining 900 points for their luxury items.