Today’s written episode of the Bigg Boss season 9 started off with a fight between Priya and Mandana. Actually, Mandana tried to clarify the issue regarding Priya’s lost scarf but Priya was not ready to listen to her at any cost. Priya said that she had been fooled by Mandana once earlier and she did not want to be fooled by her yet again. Rishabh also interfered in between and called Mandana a thief. Mandana Karimi was extremely upset and was seen crying bitterly.

However Prince Narula appeared from nowhere and surprisingly took Mandana’s side for which Priya Malik seemed to be really annoyed. Eventually, Prince had a huge fight with Priya which heated up and both exchanged some harsh words.

Bigg Boss later in the day announced a new task called “Road to finale week” whereby the top three contestants would get the ticket to finale week straight away. According to this task, each housemates would stand by his/her container which was full of sand and the target was to protect it as well as to empty the container of others. Whosoever’s sand will fall down below the bottom most red line will be eliminated from the game.

The sand could be emptied either by opening the lever underneath or by any other strategy. It was also announced that Keith would not take part in this task as he had already been nominated for the rest of the season.

The task began and some fierce fights were witnessed as this was the most important task of the season to date. The housemates initially ganged up against Priya and eventually ended up emptying her sand container. Priya was obviously very upset and had some heated arguments and nasty words exchanged with Prince. 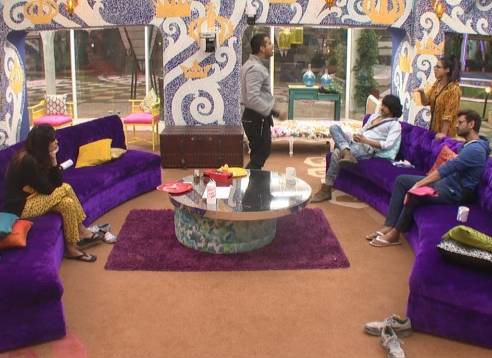 When Bigg Boss announced that the task was over for today, those five contestants who were still in the game were Prince, Rishabh Sinha, Kishwer Merchant, Rochelle Maria Rao, and Mandana Karimi.

Recommended: Click here to Type in Marathi and other Indian Languages online.

Tomorrow’s bigg boss 9 highlights showed that when the task would be resumed tomorrow, some more fierce fights would take place among the housemates.