Today[Day 7] was the first elimination based episode of the Bigg Boss Season 9, Double Trouble. The show kicked off with the superb dance performance of Salman Khan and later on Sonam Kapoor also joined him. 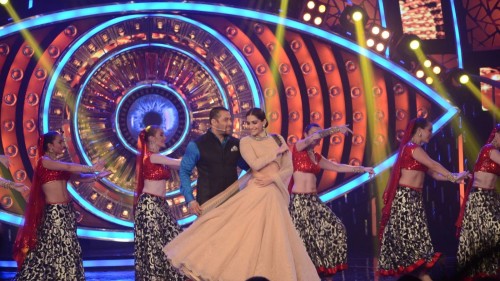 They were basically there to promote their upcoming picture called “Prem Ratan Dhan Payo” which will be released on the upcoming eve of Diwali.

Famous film actor “Ayushmann Khurrana” and senior anchor “Akash Soni” also joined the episode through camera where they were seen asking different questions from the contestants. Both of them appreciated Mandana Karimi for her so far very honest and positive attitude on the show. Mandana clearly mentioned that she had come to the Bigg Boss house to play the game and she has been doing that exactly. 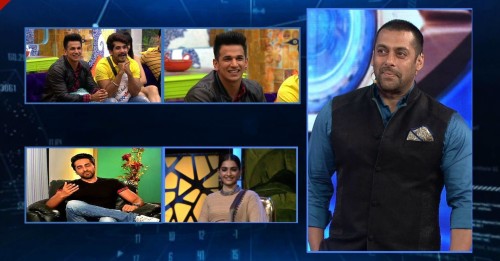 According to her, all the other housemates were being fake and hiding their true emotions. Ayushmann asked Rimi Sen to cheer up and start showing some genuine interest inside the house and actively participate in the tasks assigned by the Bigg Boss. Sonam Kapoor asked Vikas Bhalla about his friend inside the house and his reply was Keith Squeira.

Coming back to the eliminations, Salman Khan as usual kept the suspense till the very end. He first of all saved the current captains pair, that is Vikas Bhalla and Yuvika Chaudhary. Afterwards, he created real confusion for the remaining two pairs in the danger zone. Eventually, he announced that the pair of Digangana Suryavanshi and Roopal Tyagi was safe while Ankit Gera and Arvind Vegde’s pair was supposed to leave the house.

However, as Salman had already mentioned to the audience yesterday that rather than one pair in the danger zone, only one contestant with the least votes will be eliminated from the Bigg Boss House. When Ankit and Arvind’s pair was about to leave the house, Salman announced that only Ankit Gera will be eliminated today while Arvind Vegde was safe. 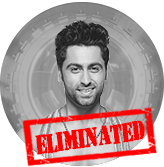 On his eviction from the house, Ankit was asked a few questions from the media persons, mainly regarding his surprise elimination so early in the show. He replied that he is famous for his acting skills and that is actually what he enjoys the most and Bigg Boss’s house was a good experience for him.