Perhaps the biggest twist of Bigg Boss Season 9 was in today’s show. Bigg Boss made an announcement early in the day that he was going to introduce a new and extremely important room of the house to the housemates which was called the “Double Trouble” room.

He further told that the contestants which will be firstly visiting this room will be Aman and Kishwer. When they went in there, the Double Trouble was seen divided into two separate portions and both of the contestants could not see each other. Furthermore, whatever was happening therein, was visible to the housemates in the living are through television monitor.

Bigg Boss announced that if anyone of Kishwer or Aman presses the buzzer in front of them, all the house will be freed from the tied belts. However, if both of them press the buzzer, both of them will stay free of belts but all the other housemates will have to be tied with the belts. Also, if none of them presses the buzzer, all others will be free while Aman and Kishwer and one other pair of their choice will be tied with the belts.

Aman and Kishwer were given three minutes to decide this and at the end, it was revealed that only Aman pressed the buzzer, which meant that the whole house was made free of belts immediately. All the housemates were extremely happy about this and celebrated. 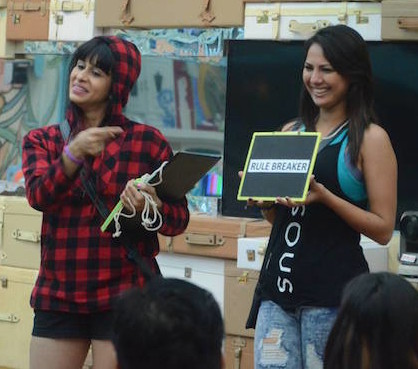 Bigg Boss gave six different awards to the captain, Kishwer and asked her to give this to a suitable housemate and also tell the reason behind it. The awards given by Kishwer to various contestants were “Boring” (Arvind), “Rule Breaker” (Rochelle), “Entertainer” (Prince), “Nakli” (Mandana), “Aswatch” (Aman) and “Kaamchor” (Vikas).

After that, Bigg Boss gave the task to the housemates called “Oppo R7 + Selfie Redefine Beauty“. According to this, contestants were divided into two teams and both the teams were supposed to take four selfies in different areas of the house turn by turn. 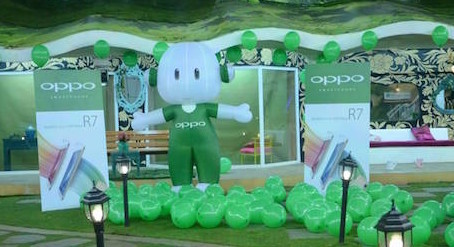 While taking selfies, the other team was supposed to distract them so that their selfies can be a mess. Digangana was made the judge for this task who eventually nominated team A as the winners of the task.